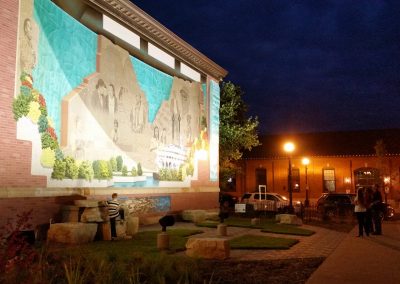 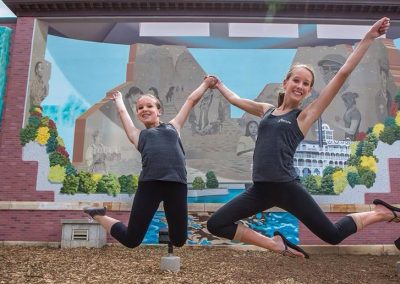 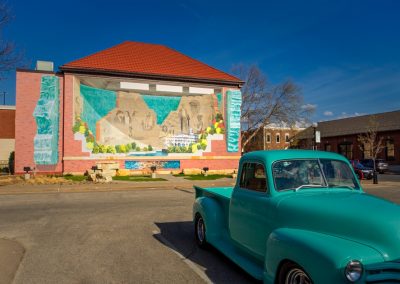 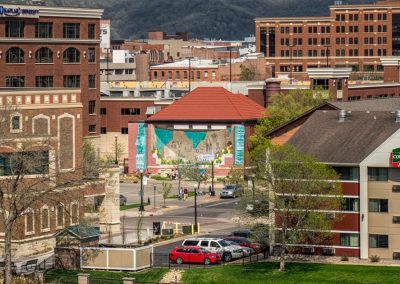 John Pugh created Confluence to celebrate the role of La Crosse as a sacred place. This sacred status arises from the interaction between the region’s rivers, landscape, and all the people who have called it home.

About 24,000 BCE, glaciers covered much of the Upper Midwest with ice more than a mile thick. These glaciers scraped the land nearly flat as they grew and spread south. However, the Driftless Area escaped glaciation, leaving steep bluffs and deep coulees intact. When the glaciers surrounding this area began melting about 16,000 years ago, they released torrents of raging water.  This water, over a period of millennia, carved the unglaciated landscape, forming the Black, La Crosse, and Mississippi Rivers, which converge here in La Crosse.

The first people of the region were nomadic hunters and gathers, pursuing Ice Age mastodons and mammoths, and later the deer, fish, and small game that still populate the countryside. More recently, mound builders and farmers, including the Ho-Chunk, filled the river valleys with villages and cornfields. Centuries later, waves of immigrants arrived from other continents.

Confluence was envisioned by internationally renowned artist John Pugh and created by him with assistance from his staff, local artists, and apprentices. The brick wall of the Pump House Regional Arts Center was covered with a white plaster.  The mural was painted on strips of non-woven canvas that were applied to the plastered wall, similar to the way that wallpaper is hung.

The art technique employed to paint this mural is trompe l’oeil, which deceives the eye into seeing three-dimensional illusions. Did you notice, for example, how the glaciers seem to jut out of the sides of the mural or that the painted bricks match the real bricks on the front of the building?

The 25-by-60-foot mural was dedicated June 14, 2014, during the first Artspire La Crosse celebration. The mural was funded by an Our Town grant from the National Endowment for the Arts, as well as State, County, City, corporate, foundation, and private support.

This mural on the Pump House Regional Arts Center in the heart of the La Crosse Arts District celebrates the spirit of this place and the importance of the arts, artists, and other creative people in forming and expressing our community’s identity. It also celebrates the convergence of many diverse peoples that have given La Crosse its unique culture.

Wrapped inside a giant arc of glacial ice dwells the sheltering cove we now call La Crosse. We’re on the inside, at the heart of the fruit looking outward toward the peel. It is a vantage point caught in the moment, yet spans the roots of the people and formation of the land. It’s a small still point on the river from which concentric ripples begin, yet we may experience all that encircles us. It’s a journey in which the destination is here.

This mural entitled Confluence, explores the unique environment, heritage and diverse community of La Crosse. The mural isn’t trying to relive another time — of “what it must have been like back then” — but celebrates today. All that has made this enchanting place, this sanctuary space that so many people call home, is reflected in a great confluence all around us.

Looking carefully out at the bluffs and valleys, the unique geological story of this driftless region is present. In the mural we look out through tree terraces, through great bluff-shaped dolomite walls, to the ice mantle of a surrounding glacier that never came inside here. Here, there is the confluence of icelessness. Henry David Thoreau said “In wildness is the preservation of the world”, and as it is with the ancient valley formations – or coulees – the glaciers never came to grind them away. Through three ice ages the earliest people came to this prairie valley shelter to live. Survival is what drew so many here long ago, and the unique beauty of this land is what draws so many today, all because the glaciers never came.

Then there’s the confluence of the three rivers: the Mississippi, La Crosse, and Black Rivers. Look again at the mural, at the three ice walls that are revealed through canyon-shaped openings, and the joined river below. La Crosse is the cross-rivers; the heart pumping sustenance through vast river arteries – transporting, reaching, nourishing, connecting. Ever renewing the circle of life. Echoes from the first river heartbeat can still be heard, seen, tasted, inhaled and felt.

Life on the river is eternal. It’s Peace. It’s the stuff from where dreams are woven. The romantic past of the riverboat era – all the stories, all the steamboats from all the different periods – can all be seen reflected in splendid layers on the “Queen” that’s rolling on the river right now. It’s the floating centerpiece of this mural. As for the the future, there are the reflecting ripples of what is, the lyrical weavings of reflections to come, and the heartbeat of the river that will echo on.

Connecting with our heritage here is like looking up at the stars.  All the points of light are from different points of time, from 100,000 years to eight minutes ago. We experience them all simultaneously at this moment, yet they are history. The stories of the early settlers, the Hmong, the Ho-Chunk and all the ancestors that came before, the entire story of who we are and what we have been, is present in the confluence of us. It’s in our memory body. You can see it reflected in your neighbor’s eyes and hear it in their voice.